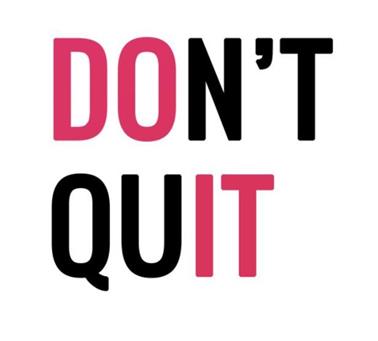 There are hundreds of ‘dichos’ or sayings in the Spanish-speaking world. One of the most popular dichos is “la tercera es la vencida,” which is similar to English’s “the third time’s a charm.” These wise sayings have been repeated from generation to generation because somewhere along the lines, somebody else went through what we may be experiencing now. For example, have you ever had one of those days where you were consumed by thoughts of giving up on something? Have you ever wanted to quit? Maybe you were having a really challenging day, or you received a low grade in school, or maybe that intense workout was a bit too much.

Life is like a roller coaster, with its twists and turns, and one cannot always predict what will happen next. The following poem describes how life can beat you down, but in order to succeed, you must pick yourself up and try again! Perhaps you have goals that may not have happened on your first or even second try this 2021, but KEEP TRYING, for it will be worth the effort once you get what you wanted… “La tercera es la vencida…” You will eventually succeed if you don’t quit!

I wholeheartedly wish you and your loved ones a Wonderful Holiday Season and a Happy, Healthy, and Blessed 2022!!! ~Ms. Sepúlveda

Don’t Quit
When things go wrong,
as they sometimes will;
when the road you’re trudging seems all uphill;
when the funds are low and the debts are high;
and you want to smile,
but you have to sigh;
when care is pressing you
down a bit;
Rest, if you must,
but don’t you quit.

Life is queer with its twists and turns,
as every one of us sometimes learns.
And many a failure turns about,
when he might have won had he stuck it out.
Don’t give up though the pace seems slow–
You may succeed with another blow.

Often the goal is nearer than
it seems to a faint and faltering man.
Often the struggler has given up
when he might have captured the victor’s cup.
And he learned too late when the night slipped down,
how close he was to the golden crown.

Success is failure turned inside out–
The silver tint of the clouds of doubt,
and you never can tell how close you are,
it may be near when it seems so far.
So stick to the fight when you’re hardest hit–
It’s when things seem worst that you must not quit.
– Author unknown