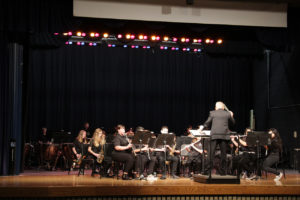 Last Friday, March 8, 2019, the Helendale School District Band (which includes every band student in Helendale School District, grades 5-12) participated in a music festival judged by the Southern California School Band and Orchestra Association at Littlerock High School. The students performed three prepared selections on stage, were then given a clinic on what they did well and what they could improve on by one of the three judges, and finished by being judged and given another clinic on sight reading music neither they nor the band director had never seen before. In both the performance and sight reading the Helendale School District band received the highest rating of “Superior”.