This article was last modified on February 4th, 2021.

The 1987 hit by the rock group Dead or Alive “You Spin Me Round” is not such a far fetched idea considering that there are “Voladores” in México and parts of Central America who literally do so. These voladores (flyers) climb up a tall wooden beam of about 100 feet high; tie a rope around their waist; leap off the beam in unison, and fly around and around that pole while hanging upside down. If you think that your Valentine’s crush spins your head round and round, imagine how dizzy being a Volador must feel! This spectacular event has been practiced this way since before any European stepped foot in the Americas. Indeed, this sounds a bit like modern day bungee jumping; however, the descendants of the Mayans consider this a sacred act.

Spanish historians witnessed and recorded the Volador ritual in the 15th century noting that in Mayan mythology the creation of the world is associated with a bird deity (Itzamna) residing at the World Tree (the center of the world). In fact, the five “birdmen” at the top of the wooden beam represent bird deities. The main dancer stands in the center and plays a flute, which represents the sound of birds singing while the four other “birdmen” (representing the north, south, east and west) circle around the beam to represent the recreation of the world. Each volador bravely climbs to the top of the pole where they perform a dance to the rhythms of a sole drum and flute. Then they tie ropes around their waist before soaring into a graceful downward descent. They spin round and round in unison multiple times. There is no safety net, and accidents sometimes occur; however, this ritual is widely popular even today.

Descendants of the Maya still live in Central America in modern-day Belize, Guatemala, Honduras, El Salvador, and parts of México. This ancient civilization developed an advanced language and writing system as well as a calendar and books. Furthermore, historians believe that the Mayans used around 700 glyphs to do this and, incredibly, 80% of their language can still be understood by their descendants today. There are numerous Mayan archeological sites left behind to explore in the jungles of the Yucatan Peninsula, and while you’re there, the Volador ritual is a must-see! 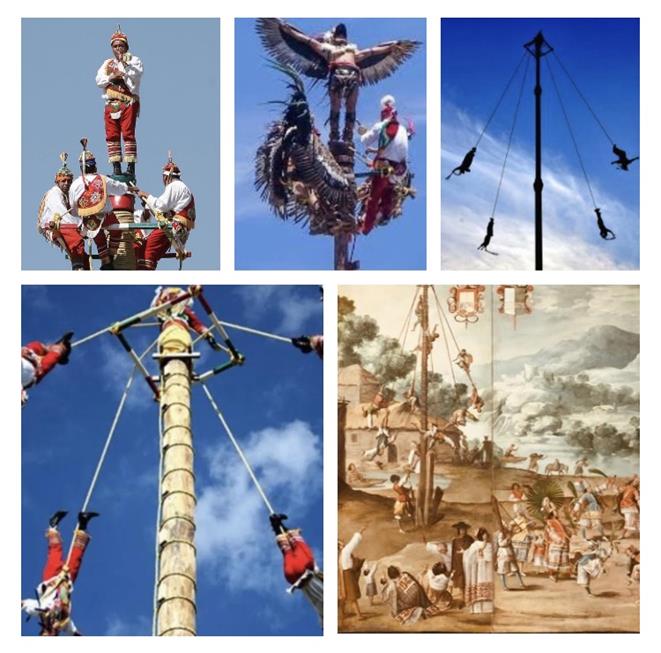